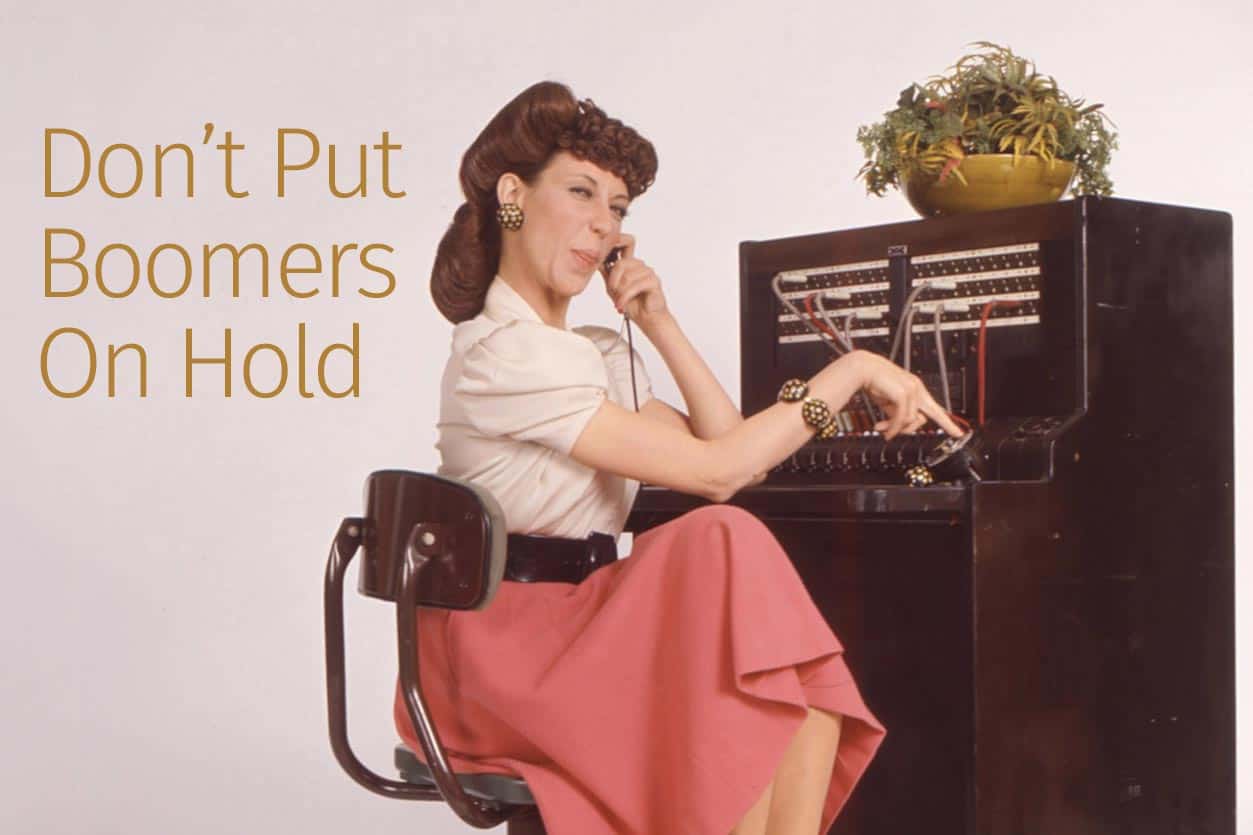 One ringy dingy, two ringy dingy … Rowan and Martin’s Laugh-In (1968-1973) was a TV favorite among leading edge Boomers. It debuted on NBC Television as the top-rated series of the 1968/69 season, with an average rating of 31.8 (TV Facts, Cobbett Steinberg).

Okay, it’s not fair to compare 1969 ratings with 2016; there’s so much more choice today. Well, that’s also true in many other arenas. For instance, phone service.

When Laugh-In ruled, Americans had only one choice for telephone service: Ma Bell aka AT&T. What’s more, via a subsidiary, AT&T had a lock on making the handsets folks leased – ownership was not an option for private individuals. 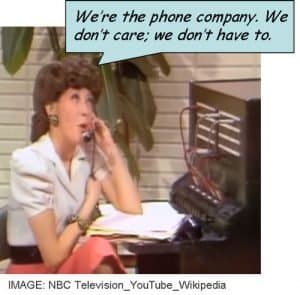 Laugh-In star Lily Tomlin nailed our frustration in her hilarious sketches as “one ringy dingy, two ringy dingy” Ernestine, the saccharine sweet phone company rep who cheerfully extorted customers to pay for erroneous charges … or else.

What resonated most powerfully with Boomers – the question authority crowd – was the line “We’re the phone company. We don’t care; we don’t have to.”

Allegedly, “the phone company” tried to drive Ernestine off the air, but, in the end, it was AT&T that lost out. Today, legions of service providers and equipment suppliers compete for consumers’ business.

Well, compete for half the market, anyway.

The over-fifty segment is so undervalued by mainstream Madison Avenue that occasional vignettes slipped into hip, youth-oriented mobile phone ads are considered enough to fake inclusiveness.

Smartphone ownership: fastest growth is in the fifty-plus demo 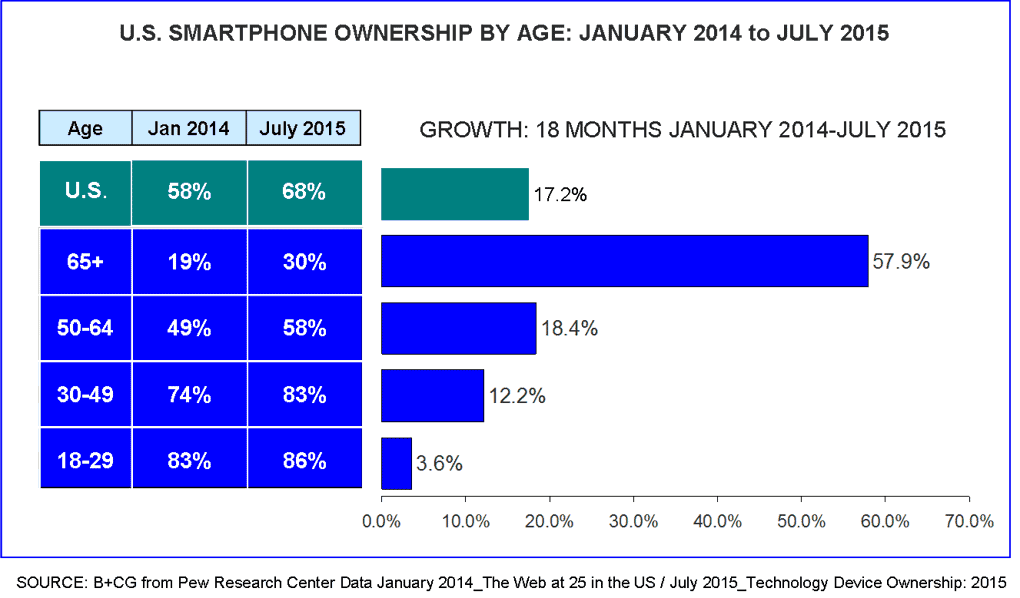 One ringy dingy … the bad news: the 18-49 smartphone market is becoming saturated.

Two ringy dingy … the good news: the 50+ demo is a vibrant, fast-growing segment – but it’s one where marketers must abandon outdated thinking and proactively engage Boomers and Seniors. 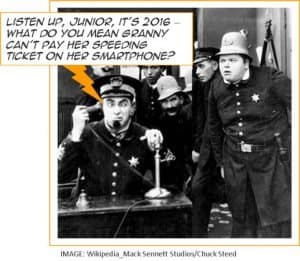 As older adults continue moving to smartphones and competition intensifies, ignoring them is anything but smart. Let’s start by ditching the tired old idea that they don’t – and won’t – adopt new technology.

So the challenge isn’t to take Boomers and Seniors mobile but to convert them to smartphones.

More specifically, convert them to your brand, not just to the category.

Just how many potential new smartphone customers are at stake as the market matures?

Well, projections are always tricky – you know, lies, damned lies and statistics and all that – but we estimate almost two-thirds of future converts from regular cellphones will come from the 50+ space. That’s on the high side of 18 million net new units on the table. 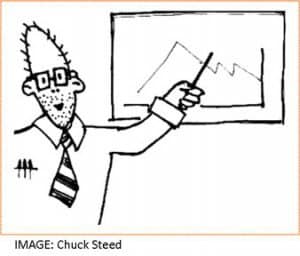 Well, channeling our inner guru, we start with the conservative assumption that by 2015 everyone aged 18+ who wanted a mobile phone already had one (92% according to Pew).

The guru also figures that, while the smart share of mobile phones will continue to increase, saturation levels will likely vary by age: 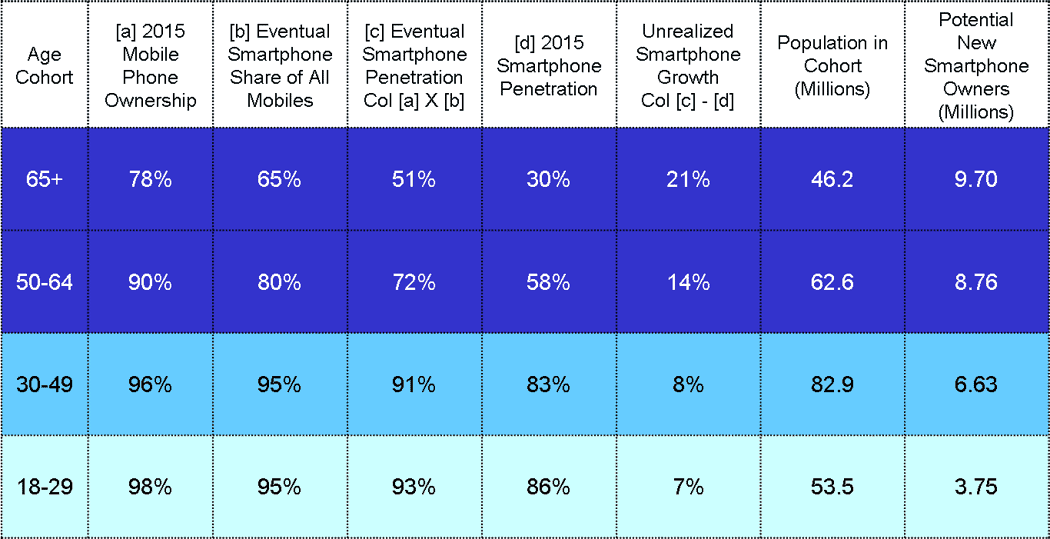 SMS from the 50+ space: put us on hold at your peril

But before they try speaking to the 111 million American consumers over fifty, marketers must first learn to listen. And listen very carefully, because this enormous Boomer-Plus population speaks a nuanced dialect, rich in symbolism and hidden meaning. The 50+ space is no place for amateurs.

Fortunately, learning to engage those 18+ million new smartphone prospects is just one ringy dingy away. We’re here to help.

Of course, since it’s 2016, you can make that one clicky clicky as well.