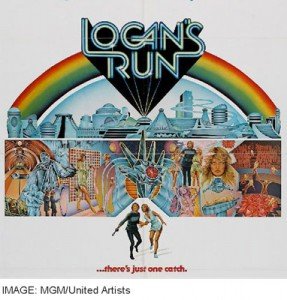 One Boomer heyday sci-fi gem that never made it to Mystery Science Theater 3000 is the 1976 classic Logan’s Run.

In the 23rd century, a post-apocalypse utopia thrives under a sealed dome, safe from the primitive remnants of the old order. The inhabitants enjoy an indulgent, hedonistic existence regulated by an all-caring computer. They travel in self-driving transportation pods. Everyone is young. Everyone is hip.

But, as the promo says, there’s just one catch: everyone is terminated at age 30. But in 1976 we Boomers didn’t worry. Hey, it was only a movie.

Who knew it would inspire the Logan’s Run School of Marketing that rules so many brand strategies today?

With a token nod to the meme that fifty is the new thirty, Americans get a two-decade reprieve before automatic termination as they exit the 18-49 demo. Allegedly, their brand-switching adaptability implant expires at midnight on their 50th birthday and they disappear from mainstream advertising.

In the movie, Logan is a disruptive, a runner who escapes conventional wisdom to find an unexpected world of opportunity outside the dome.

And always have been. Consider how we learned to fly.

How Boomers learned to fly – for less money 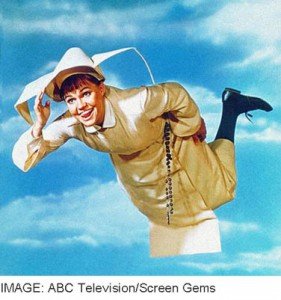 When Boomer favorite The Flying Nun took to the air in 1967, only 20% of American adults had flown in a commercial aircraft (Gallup). By 2000, after we Boomers embraced the friendly skies and introduced our children, the Millennials, to the joys of air travel, the figure zoomed to 90%

Boomers also embraced a huge decline in airfares, due both to our own rising demand and, as The Atlantic explained in 2013, deregulation of rigid pre-1978 price controls. 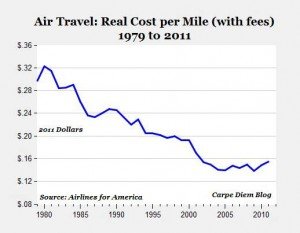 The Atlantic reported it was illegal to charge less than $1,442 for a flight between New York City and Los Angeles in 1974 (2013 inflation-adjusted dollars).

No pain, no gain.

Before deregulation, air travel was the domain of celebrities, politicians and business executives. But as it became commonplace, new behaviors crept in; we learned to …

The 50+ space: a world class destination

Of the over 110 million consumers aged fifty and over, the largest cohort is the Boomer-Plus Generation, born 1940 to 1965.

At 93 million strong, if we were a country it would be Earth’s 15th most populous. And, as owners of 70% of U.S. household net worth, we are a bigger, wealthier market than Germany or France or the UK – and far bigger than Canada and Australia combined.

No wonder enterprising Millennial marketing Logans are beginning to board flights to the 15th Nation and the immense opportunities that await in the 50+ space.

They’ll find life outside the dome is far less-regulated than where they live now.