David Wolfe, author of Ageless Marketing, tells the story of Reader’s Digest’s efforts to increase readership. Back around 25 years ago there was a successful lifestyle magazine for the older crowd called 50 Plus. Readers Digest took notice of America’s aging population and the beachhead that 50 Plus had established in older markets and bought 50 Plus from its founding owners.

Legions of long loyal 50 Plus subscribers were outraged. They were outraged by the name change, and outraged by the replacement of the real faces of aging with air brushed faces that masked the realities of aging. The iconic Reader’s Digest, one of the smartest magazine marketers in America, had struck out with an age group it should have better understood: they were a sizable slice of Reader’s Digest circulation. 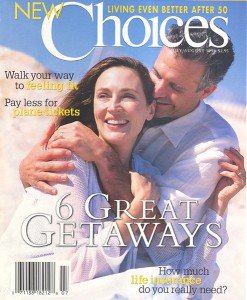 The New Choices team failed to realize the importance of authenticity in the ranks of older people. Apparently, aging was not a big issue to many on 50 Plus’s subscription roster.

Most advertising featuring pictures of older people are no more authentic than New Choices was. And was is the right word because it shut down its operations in 2002.

It’s widely known in marketing circles that most people over 50 think marketers misrepresent them in ads. Yet, few marketers seem influenced by this or know what to do about it. However, the remedy is simple: Be authentic in representing aging.

Being authentic doesn’t mean glorifying wrinkles or other signs of aging. Above all it simply means being natural. When they are not poorly executed jokes about aging, most depictions of seniors in ads are unnatural. Their contrived smiles in staged settings work against the very idea of authenticity, undercutting the ad’s credibility.

The best way to connect a brand with Baby Boomers is to do so indirectly. This is not because the idea of aging is a turnoff for older people. A Duke University discovered higher levels of happiness among 70-year-olds than among 30-year-olds. Older people know that in our society aging is widely regarded as an affliction. After all, how many products are promoted as “anti-aging” remedies? Older consumers tend to reject marketing that strongly and directly connects a brand and aging not because of how they feel about aging but because of how much of the rest of society feels about aging.

One supposed truism among marketers is that because Baby Boomers tend to see themselves as 10 or 15 years younger than they are chronologically it’s best to use appropriately younger models. Not so. Not just Baby Boomers but consumers of all ages tend to lag behind their chronological age in how they feel. It works out that “cognitive age” tends to be about 70 to 85 %of chronological age.

Using younger models than the core target market is not authentic. But, it is commonly done, for example, in marketing senior housing communities. The average age of new move-ins in full service senior communities is generally in the very late 70s to early 80s. Yet, ads commonly feature models who are clearly in their 60s – or younger.

The practice of using models that are much younger than residents in retirement communities can be costly in terms of wasted marketing dollars. Imagine the 68-year-old husband who with his 65-year-old wife visit a retirement community they have seen advertised with younger models. What is their likely reaction when seeing that most residents are well into their 80s? “Dear, I don’t think we’d like this place. There’re too many old people.”

The fact that we struggle so mightily in our society to achieve authenticity says something not so great about our values. But to the degree that a marketer is able to project authenticity in marketing to Baby Boomers, success will more likely be achieved.

View this article on MediaPost.